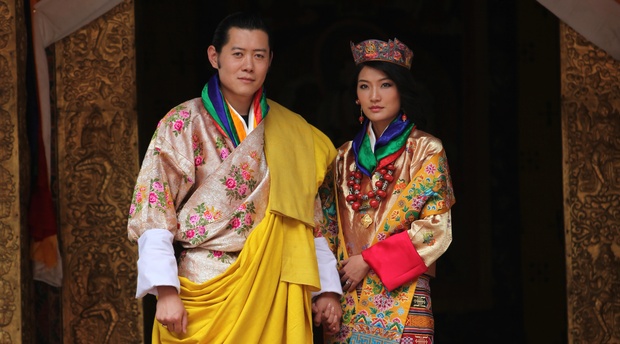 Bhutan is a last kingdom in South Asia and the country known for Gross National Happiness as the guiding principle of development. Its culture and tradition very unique to the neighbouring country and to the world. Learn some few facts about Bhutan

Name of the Country:

Time zone: 6 hours ahead of GMT

Archery is the national sports of the Kingodm. Archery was declared the national sport in 1971, when Bhutan became a member of the United Nations. Since then, the popularity of Bhutanese archery has increased and popularly played during local festivals, between public ministries and departments, and between the dzongkhags and the regional teams.

Archery in Bhutan is culturally distinctive and is a way of socialization, communication, and development of relations between people

The National Emblem of Bhutan

The National Emblem, contained in a circle is composed of a double diamond thunderbolt placed above a lotus, surmounted by a jewel and framed by two dragons. The double diamond thunderbolt represents the harmony between secular and religious power. The lotus symbolizes purity and the jewel represents sovereign power. Thetwo dragons - male and female stand for the name of the country - the Land of Thunder Dragon (Druk Yul) which they proclaim with their thunder in unison.

The national flag of Bhutan is based upon the tradition of the Thunder Dragon of Bhutanese Mythology. The Dragon is closely associated with Bhutan.The basic design of the flag by Queen Mother ChoyingWangmoDorji dates back to 1947.The National flag is rectangle in shape that is divided into two parts diagonally. The upper yellow half signifies the secular power and authority of the king while the lower saffron-orange symbolizes the practice of religion and power of Buddhism. The dragon signifies the name and the purity of the country while the jewels in its claws stand for the wealth and perfection of the country

The National Flower of Bhutan

The national flower of Bhutan is the Himalayan Blue Poppy (Meconopsishorridula). In Bhutan, the Blue Poppy grows to a height of 1 meter on the rocky mountain terrain, above the tree line at altitudes of 3500m to 4500m. It is a delicate blue or purple tinged blossom with a white filament. The flower was discovered in 1933 by British botanist George Sherriff in remote part of Sakteng in eastern Bhutan during an expedition in the Himalayas. Interestingly Frank Ludlow of the same expedition discovered a rare butterfly called the Ludlow's Swallowtail, another icon found exclusively in Bhutan

The National Tree of Bhutan

The Himalayan Cypress (Cupressustorolusa) is the national tree of Bhutan. This tree is associated with religion, and usually found near religious structures like Dzongs and Temples in the temperate zone between altitudes of 1800m and 3500m. To the Bhutanese, its ability to survive on rugged terrain represents bravery and simplicity.

The National Bird of Bhutan

The national bird is the Raven. The symbol of the Raven head is the most prominent component of the royal crown. In Bhutan, the raven represents the deity GonpoJarodongchen, the Raven-headed Mahakala, one of the country's chief guardian deities. The Bhutanese credit the Raven with having guided the founder of BhutanZhabdrungNgawangNamgyelto victory during the invasion from U-Tsang(Tibet) in the seventeenth century.

The National Animal of Bhutan

Takin National Animal of BhutanThe national animal is the Takin (Burdorcastaxicolor). This bovid is also associated with religious history and mythology. Today it is a rare animal, and its conservation status is "vulnerable." This unique animal has the head of a sheep and body of a cow! Legend has it that this animal was conjured up by Lam DrukpaKuenley, a Buddhist Saint notoriously famous for his crude and un-conservative ways of preaching Buddhism. There is a Takin Reserve in Thimphu for those wishing to see this strange and beautiful animal.

Want to Know About Bhutan Holiday