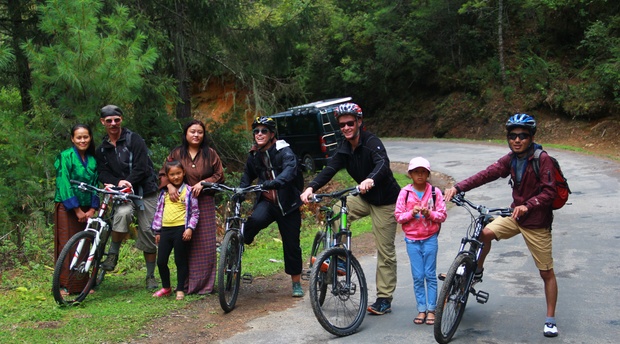 As dawn breaks and the morning sun rises from the blue pine forest in the adjacent hills, streaks of gold and silver shimmers on one of the oldest temple in the capital -the Changangkha Lhakhang/temple.

Phajo Drugom Zhipo the great legendary saint of built this monastery in the 13th Century. The residents of Thimphu can be seen visiting in the early hours of the morning as the monks chant their regular prayers with melodious sounds and beatings of the various religious instruments. The temple is built on top of a hill from where one can enjoy a bird’s eye view of the beautiful Thimphu valley below.

After the customary three rounds around the temple and getting spiritually blessed, you will mount on your bike, ride a little further up till the Nado incense factory, where religious incense is made. To the left is a trail that leads towards the giant Buddha Statue at Kuenselphodrang. The trail will take you through sparsely populated blue pines giving a perfect view of the Thimphu valley and as you enter further, the jungle gets thicker with thick leaved coniferous trees like oak and shrubs of bamboo. The trail especially in winter is carpeted with Oak and Blue pine leaves and in the spring beautiful with colorful cherry blossoms and rhododendron flowers.  However the trial maybe a bit tricky during the monsoon due to heavy rain, but your tour guide will help you on the muddy stretches.

The trail leads through gentle slopes as well as steep rugged mountain paths between the placid woods. We would suggest you to get down from your bike when the rocky cliff tests your tires in between some unfinished trail.

After 3 hours of walking under the cool shade, you will come to an open space where you will see the giant statue of Buddha Dordenma – the biggest sitting Buddha in the world.

Start Location: From Your Hotel