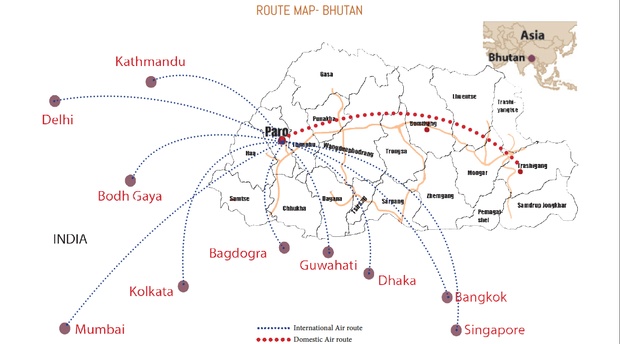 The entry point by road for visitors travelling to Bhutan are; Phuentsholing, Gelephu and Samdrup Jongkhar in the south bordering India.

Phuentsholing town is located about 170 kilometers east of Indian National Airport Bagdora. From Bagdora airport, it will take approximately four hours to reach Phuentsholing border for the visitors travelling to Bhutan from the south. From Phuentsholing to Thimphu, it’s another 5-6 hours drive uphill towards the interiors of the Himalayas. Then you reach Thimphu, the capital of the Kingodm, Bhutan.

From the border town of Gelephu its approximately 270 kilometers to Thimphu about 8 hours drive. The journey takes you across three districts, from the sub-tropical plains of the foothills of the Himalayan mountains to the moderate alpine zone in Thimphu.

Druk air and Bhutan Airlines are the the only two airlines operating in Bhutan and Paro International Airport the only Airport in Bhutan.

As you approach Bhutan on Drukair or on Bhutan Airlines, you will see some of the most spectacular and beautiful Himalayan ranges.